We are currently building AWS regions in Australia, Indonesia, Spain, India, and Switzerland.

UAE in the Works
I am happy to announce that the AWS Middle East (UAE) Region is in the works and will open in the first half of 2022. The new region is an extension of our existing investment, which already includes two AWS Direct Connect locations and two Amazon CloudFront edge locations, all of which have been in place since 2018. The new region will give AWS customers in the UAE the ability to run workloads and to store data that must remain in-country, in addition to the ability to serve local customers with even lower latency.

As is always the case with an AWS Region, each of the Availability Zones will be a fully isolated part of the AWS infrastructure. The AZs in this region will be connected together via high-bandwidth, low-latency network connections to support applications that need synchronous replication between AZs for availability or redundancy.

AWS in the UAE
In addition to the upcoming AWS Region and the Direct Connect and CloudFront edge locations, we continue to build our team of account managers, partner managers, data center technicians, systems engineers, solutions architects, professional service providers, and more (check out our current positions).

We also plan to continue our on-going investments in education initiatives, training, and start-up enablement to support the UAE’s plans for economic development and digital transformation.

Our customers in the UAE are already using AWS to drive innovation! For example:

Mohammed Bin Rashid Space Centre (MBRSC) – Founded in 2006, MBSRC is home to the UAE’s National Space Program. The Hope Probe was launched last year and reached Mars in February of this year. Data from the probe’s instruments is processed and analyzed on AWS, and made available to the global scientific community in less than 20 minutes.

Anghami is the leading music platform in the Middle East and North Africa, giving over 70 million users access to 57 million songs. They have been hosting their infrastructure on AWS since their days as a tiny startup,. and have benefited from the ability to scale up by as much as 300% when new music is launched.

Sarwa is an investment bank and personal finance platform that was born on the AWS cloud in 2017. They grew by a factor of four in 2020 while processing hundreds of thousands of transactions. Recent AWS-powered innovations from Sarwa include the Sarwa App (design to market in 3 months) and the upcoming Sarwa Trade platform.

Stay Tuned
We’ll be announcing the opening of the Middle East (UAE) Region in a forthcoming blog post, so be sure to stay tuned!

AWS Local Zones place select AWS services (compute, storage, database, and so forth) close to large population, industry, and IT centers. They support use cases such as real-time gaming, hybrid migrations, and media & entertainment content creation that need single-digit millisecond latency for end-users in a specific geographic area.

Last December I told you about our plans to launch a total of fifteen AWS Local Zones in 2021, and also announced the preview of the Local Zones in Boston, Miami, and Houston. Today I am happy to announce that these three Local Zones are now ready to host your production workloads, joining the existing pair of Local Zones in Los Angeles. As I mentioned in my original post, each Local Zone is a child of a particular parent region, and is managed by the control plane in the region. The parent region for all three of these zones is US East (N. Virginia).

Using Local Zones
To get started, I need to enable the Zone(s) of interest. I can do this from the command line (modify-availability-zone-group), via an API call (ModifyAvailabilityZoneGroup), or from within the EC2 Console. From the console, I enter the parent region and click Zones in the Account attributes: 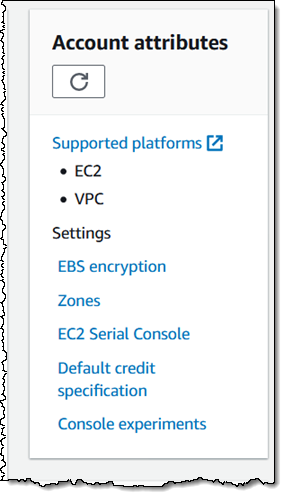 I can see the Local Zones that are within the selected parent region. I click Manage for the desired Local Zone: 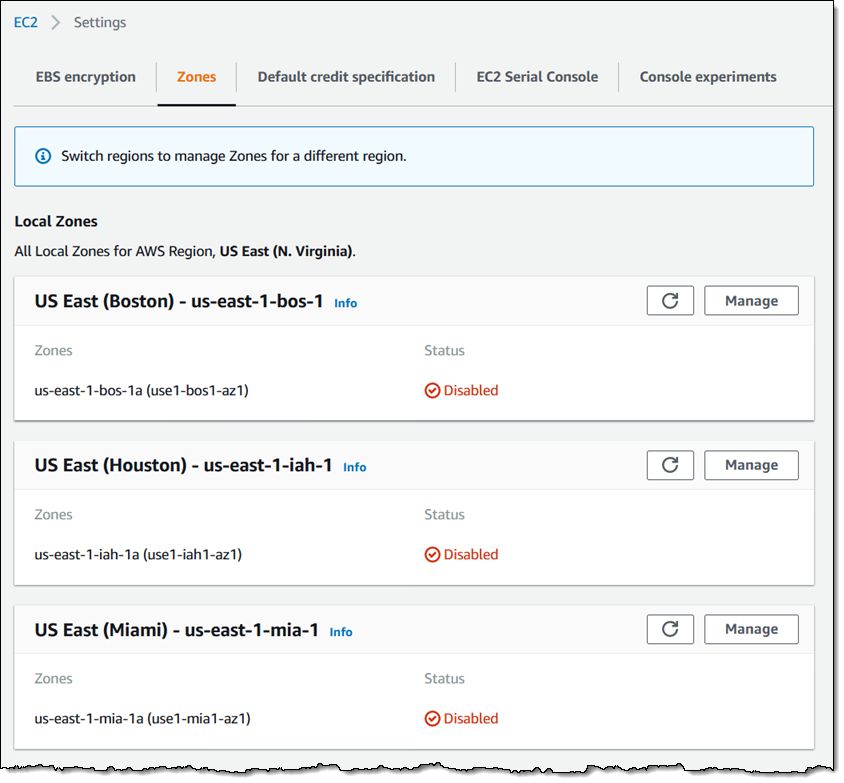 I click Enabled and Update zone group, and I am ready to go!

I can also use EC2 Auto Scaling, AWS CloudFormation, and Amazon CloudWatch in the parent region to monitor and control these resources.

Local Zones in Action
AWS customers are already making great use of all five operational Local Zones! After talking with my colleagues, I learned that the use cases for Local Zones can be grouped into two categories:

Distributed Edge – These customers want to place selected parts of their gaming, social media, and voice assistant applications in multiple, geographically disparate locations in order to deliver a low-latency experience to their users.

Locality – These customers need access to cloud services in specific locations that are in close proximity to their existing branch offices, data centers, and so forth. In addition to low-latency access, they often need to process and store data within a specific geographic region in order to meet regulatory requirements. These customers often run a third party software VPN appliance on Amazon EC2 instance to connect to the desired Local Zone.

Here are a few examples:

Ambra Health provides a cloud-based medical image management suite that empowers some of the largest health systems, radiology practices, and clinical research organizations. The suite replaces traditional desktop image viewers, and uses Local Zones to provide radiologists with rapid access to high quality images so that they can focus on improving patient outcomes.

Edgegap is a game hosting service provider focused on providing the best online experience for their customers. AWS Local Zones gives their customers (game development studios such as Triple Hill Interactive, Agog Entertainment, and Cofa Games) the ability to take advantage of ever-growing list of locations and to deploy games with a simple API call.

JackTrip is using Local Zones to allow musicians in multiple locations to collaboratively perform well-synchronized live music over the Internet.

Masomo is an interactive entertainment company that focuses on mobile games including Basketball Arena and Head Ball 2. They use Local Zones to deploy select, latency-sensitive portions of their game servers close to end users, with the goal of improving latency, reducing churn, and providing players with a great experience.

Supercell deploys game servers in multiple AWS regions, and evaluates all new regions as they come online. They are already using Local Zones as deployment targets and considering additional Local Zones as they become available in order to bring the latency-sensitive portions of game servers closer to more end users.

Takeda (a global biopharmaceutical company) is planning to create a hybrid environment that spans multiple scientific centers in and around Boston, with compute-intensive R&D workloads running in the Boston Local Zone.

Ubitus deploys game servers in multiple locations in order to reduce latency and to provide users with a consistent, high-quality experience. They see Local Zones as a (no pun intended) game-changer, and will use it them to deploy and test clusters in multiple cities in pursuit of that consistent experience.

Learn More
Here are some resources to help you learn more about AWS Local Zones:

Stay Tuned
We are currently working on twelve additional AWS Local Zones (Atlanta, Chicago, Dallas, Denver, Kansas City, Las Vegas, Minneapolis, New York, Philadelphia, Phoenix, Portland, and Seattle) and plan to open them throughout the remainder of 2021. We are also putting plans in place to expand to additional locations, both in the US and elsewhere. If you would like to express your interest in a particular location, please let us know by filling out the AWS Local Zones Interest Form.

Over time we plan to add additional AWS services, including AWS Direct Connect and more EC2 instance types in these new Local Zones, all driven by feedback from our customers.