Products are tools that enable people to achieve goals. In order for products to be effective, the people managing them must implement and use them appropriately. This requires technical personnel and non-technical personnel to communicate effectively while working toward solving the same problem. Collaboration is key to mapping technical specifications to business functionality in an efficient manner.

TOGAF has its origins in the U.S. Department of Defense. It provides an approach on how to design, implement, and govern an enterprise information architecture.

TOGAF is a framework that can be used to develop the following architecture types: 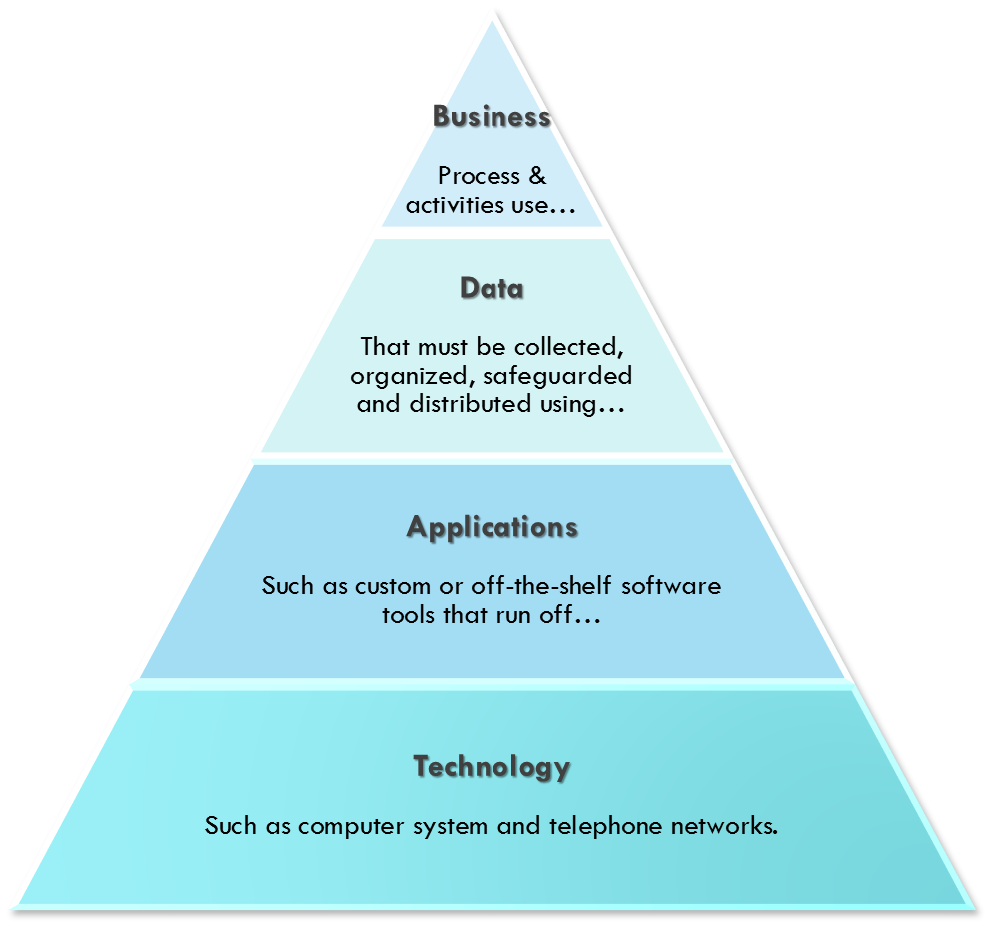 Endpoint security is the process of securing the various endpoints connected within your network, often defined as end-user devices such as mobile devices, laptops, and desktop PCs, although hardware such as servers in a data center are also considered endpoints. This is best practice as defined by all Security Compliances Frameworks such as PCI DSS, ISO 27001, and SSAE 16.

LabTech can take care of any repetitive IT maintenance task or process, monitor mission critical network components, run auto-remediation programs, and much more.

Regardless of their longevity, any web application is vulnerable to security exploits. Robust IPS/IDS solutions such as those offered by Security Onion will detect and block attempted attacks, and should be incorporated into a larger and layered security approach. Security Onion is quickly evolving and adding many new tools on a regular basis, thanks to its very active and growing user base. It is a distributed tool that allows any security analyst to configure and run an intrusion  detection system with full monitoring and reporting capabilities in just a matter of minutes.

We provide Network Detection Systems Integrations with the features below

ZeroKit is a zero knowledge auth + end-to-end encryption SDK: all your apps need to keep user data secure in the cloud.
User authentication, channel encryption (HTTPS) and at-rest encryption are the technologies to keep data secure in internet apps. At the beginning of every software project, developers build a custom solution to make these 3 technologies work together: the result is a software that’s vulnerable to many attacks, such as:
ZeroKit is web security reimagined: a technology that integrates user authentication, channel encryption and at-rest encryption into one SDK that can’t be taken apart. ZeroKit uses auth technology that doesn’t use hashes and thus, less vulnerable to attacks. For logged-in users, ZeroKit seamlessly encrypts user data on client devices (in mobile apps or in web browsers) at the time when data is created; it keeps data encrypted throughout transit and at-rest, until the data is displayed on another user’s device. No server code (unless specifically granted access) or cloud providers can see user data.
ZeroKit can be integrated into any mobile or web app, and can eliminate server-side hacks and password breaches. View ZeroKit’s encryption documentation here.
In recent news, the ZeroKit team announced a collaboration with Apple, protecting patient data in healthcare apps.
Load Balancing

NGINX is distributed with an “open core” model:

For information on load balancing AWS applications, and a comparison with Amazon ELB, click here.